Plant a tree in memory of Charles
An environmentally-friendly option 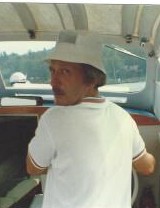 Charles Weinstein, Sr., 84, passed away peacefully at Woodlawn Nursing Home on March 18, 2021.  He was born in Brooklyn, NY on December 27, 1936 to Harry Weinstein and Emma Blodgett Weinstein.  The family moved to Sunapee permanently when he was a young boy.  He attended Sunapee School graduating with the class of 1955.  While in school he participated in sports, baseball as their catcher and on the ski team which he excelled at ski jumping.  He attended the vocational school in Manchester, NH taking classes for auto mechanics.

His many passions included his antique cars, a 49 Lincoln convertible and a 41 Hudson which he could be seen driving around in the summer months.  He also enjoyed refinishing old boats and enjoyed his time on Lake Sunapee in his Chris Craft Cabin Cruiser.  He participated in the antique boat parades every summer.  He once welded two card hoods together and could be seen rowing around Mountain View Lake where he owned a cottage.

He was very much involved with the town, serving on the Planning Board and also serving as Selectman.  He was instrumental in starting a winter carnival.  Charlie was very social and enjoyed stopping in to visit his friends and family.  He always called it making his rounds.  He enjoyed gardening and having friends over for his annual corn roasts while living at his home in Wendell, NH.  He could always be found at lunch time watching his favorite soap, The Young and The Restless.  He always made that his lunch break and enjoyed watching it with his mother and son.

In the early nineties, he and Jean retired to the coast of Maine.  He did odd jobs and still enjoyed refinishing boats.  While there, he met a whole new group to continue socializing with, continuing to have his annual corn roast and inviting everyone for Christmas Eve get-togethers.

We all have memories of going to visit, sitting on his dock while fresh lobsters were being delivered.  His favorite saying, "you can't get them fresher than this."

He was predeceased by his parents and wife, Jean.  He is survived by his son, Charles Weinstein, Jr., daughter, Kathy Weinstein and her partner, Greg Noyes, and daughter, Julie Usko, all residing in Sunapee.  He has 6 grandchildren all residing in Sunapee, Craig Heino, Brian Heino, Rylee Weinstein, Ethan Weinstein, Taylor Usko, and Danielle Usko.  He also leaves behind 5 great-grandchildren, Craig's children, Ashley and Joshua Heino, and Brian's children, Addilyn, Brysen, and Carsyn Heino.  He also has many cousins who were a big part of his life through the years, all getting together for reunions at the Blodgett house on Lower Main St.

His family would like to thank the staff at Woodlawn Nursing Home for the extra special care given to him.  They were definitely his 2nd family.  We appreciated their care during this past year when families couldn't visit with their loved ones.

In lieu of flowers, memorial donations may be made to Woodlawn Care Center Resident's Care Fund, 84 Pine Street, Newport, NH 03773.

We are planning a graveside service and celebration of life at a later date.

Plant a tree in memory of Charles by clicking here.
To send flowers to Charles' family, please visit our floral store.

Plant a tree in memory of Charles
An environmentally-friendly option

Plant a tree in memory of Charles

1 tree planted in memory of Charles

Charlie was a great person..visited him when possible at

Kathy, Chuck and Julie.  I  am sorry for the loss of your Dad. I remember him fondley. He was a selectman when I ran for Sunapee Police Chief. He offered his support and humor. He also came to our house on Chase Street with short notice to assist with a problem with my well pump. Bless and I hope you all are well. Michael LaVoie

Julie,Chuck, and Kathy, I have fond memories of your dad and all the help he gave us at Runtley.s. Please accept my thoughts for you all at this sad time.  What a true character Charlie was. Donna Young

I am so sorry for your loss of your dad. Thinking of you all. I know this past year has been the hardest with covid and not being able to see him. Woodlawn took good care of him which I hope was comforting ❤️

Plant a tree in memory of Charles